The school year has been over for a while. Families are traveling to exotic places and to our beautiful State Parks enjoying the simple pleasures of outdoors living. As I myself enjoy the lazy days of summer,  I want to take this time to reflect on this past school year, what we have accomplished at TeethFirst with Supervised Flossing and Brushing in Park City, and offer some suggestions on steps schools can take in helping children achieve and maintain good oral health.

In February, TeethFirst visited Grade 2 classrooms in McPolin Elementary and Parley’s Park Elementary Schools to deliver a workshop that covered:

These workshops were made possible by a Grant from the Park City Education Foundation and the generous gift of goods and time from Dr J. Brandon Bailey, a pediatric dentist in Park City.

Observations show that there is a need for more oral health classes:

Supervised Flossing and Brushing for Kindergartners at McPolin Elementary

Thanks to a Grant from the Park City Ed Foundation and the generosity of McPolin Elementary PTO, TeethFirst was able to provide 52 Kindergartners with the benefits of a supervised flossing and  brushing program after lunch every school day from February 23rd to June 3rd. A big thank you also to Ms Denine Therrien and Genevieve Mullins for their unwavering support and dedication to this program. 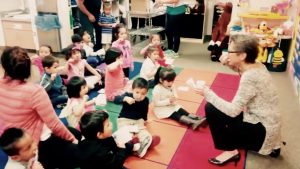 Sister Mary Ann Pajakowski and  Miriam Garcia met with TeethFirst in March and launched a supervised brushing program for all the pre-schoolers at St Mary’s Church early April. The program ran to the end of the school year. Thank you to the Holy Cross Ministry for funding all the drying racks and covers for this program. And thanks to Shanna Price’s leadership, all premium quality toothbrushes (OralB Stages 2 and 3) and toothpaste for this program were donated by Proctor and Gamble.

What School Can Do to Promote Oral Health

I propose a District Wide program of daily oral health practices in schools. Very simple practices of 5 minutes each day under the supervision of elementary and pre-school classroom teachers. We have successfully tested such programs in 4 Kindergarten classrooms in 2015 and 2016 at McPolin Elementary and at St Mary’s church with pre-schoolers in the spring of 2016.
93% of the teachers said they will support this movement and the parents need it. The numbers speak for themselves: 73% of parents have a hard time getting their children to brush their teeth at bedtime, before school or both. Half of the parents say they’re willing to pay to support such a program and 91%, almost all of them, said they would participate if the program included a home portion. We know from the National Supervised Tooth Brushing Program in Scotland that programs like this make a BIG difference. In Scotland, over decades and with close to 100,000 children, they have consistently and significantly reduced the incidence of dental caries in every school, every community and across the whole country simply by introducing a supervised tooth brushing programs in schools.

This site uses Akismet to reduce spam. Learn how your comment data is processed.

What are you looking for?